Sometimes a picture doesn't say it all.  I wish you could see the walnuts and cranberries embedded inside this sandwich.  Take my word for it, they are there and they are yummy!  One of my favorite salads is sweet and salty, chewy and crunchy - and has all the same ingredients as the sandwich. 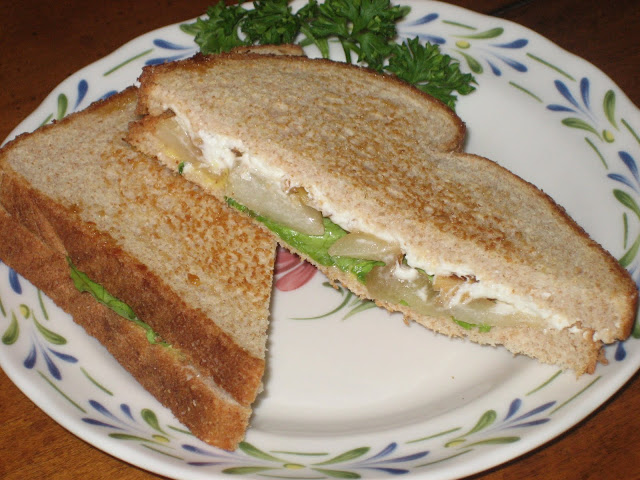 Melt butter over low heat in large skillet and stir in brown sugar.  Cook, stirring, until sugar is almost melted.  Toss in pear slices and continue to cook, stirring frequently, until pear is golden, about five minutes; set aside.

Wipe out skillet and spray with olive oil spray, then place over medium heat.  Cook sandwiches until golden on one side, then flip and cook until golden on other side.  Cut each sandwich in half and serve immediately.  Makes 4 sandwiches, 5 points plus each.
Posted by Tracy at 8:30 PM

Email ThisBlogThis!Share to TwitterShare to FacebookShare to Pinterest
Labels: Snacks and Sandwiches

Tracy
A southern California gal, married with four children and a dog... belief in a healthy lifestyle... "foodie" who loves cooking and all things food-related... overwhelming desire to share this passion with friends, old and new.