Do you talk about food while exercising?  Surprise!  I do.  As we worked side by side on the ellipticals at the gym, my friend described a potato dish he planned to make.  It was popularized by Jacques Pepin yet I had not heard of it.  Intrigued as always, I went right home and looked it up. 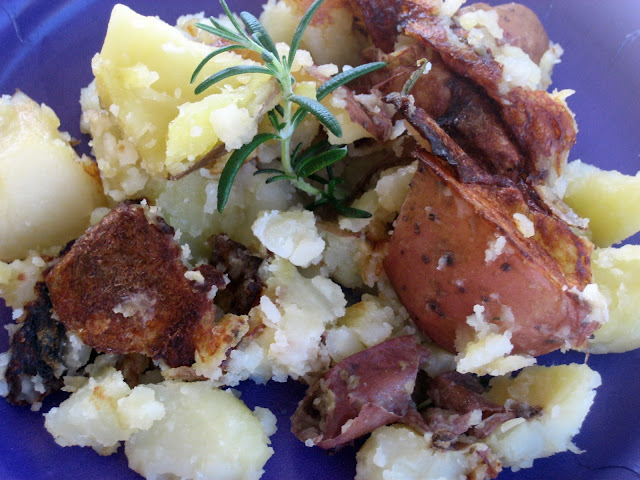 My recipe is very loosely based on Jacques Pepin's "Potatoes Fondantes."  The true recipe calls for tiny, whole potatoes, but since mine were big, I cut them in small pieces and forged ahead.  As you can see, when prepared, they are scattered-looking instead of nice and neat.  No problem, the flavor will win you over despite the messiness.
Jacques' Smashed Potatoes

If potatoes are not about 1 1/2 inches in diameter, cut them into 1 1/2-inch chunks.  Place in one layer in bottom of large nonstick skillet and toss in rosemary.  Pour broth and olive oil over potatoes, and sprinkle with salt.  Bring to a boil over high heat.  Reduce heat to medium and cover, keeping lid slightly ajar.  Boil about 20 minutes until potatoes are tender.

If liquid is not halfway covering potatoes, add a little more broth or water.  Remove pan from heat and smash each potato or potato chunk lightly with fork.   Place pan back on medium-high heat and boil about 10 minutes, until liquid has evaporated and potatoes are brown on one side.  Flip potatoes and brown other side, about 5 minutes.

Let potatoes rest five minutes before serving.  Makes 6 (about 2/3-cup) servings, 3 points plus for Weight Watchers or 128 calories per serving.
Posted by Tracy at 8:49 PM

Email ThisBlogThis!Share to TwitterShare to FacebookShare to Pinterest
Labels: Side Dishes

Tracy
A southern California gal, married with four children and a dog... belief in a healthy lifestyle... "foodie" who loves cooking and all things food-related... overwhelming desire to share this passion with friends, old and new.